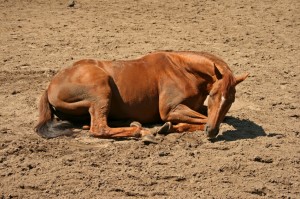 Founder is a severe form of lameness caused by laminitis of the horse’s foot.  Laminae are the flexible interwoven layers of transitional keratinous material that form the shock-absorbent attachment between the coffin bone and the rigid hoof wall.  They are responsible for transferring the animal’s weight evenly onto the hoof and dispersing the impact of locomotion on the skeleton.  Laminitis means inflammation of these supporting structures, the causes of which are variable and not fully understood.

Founder affects primarily, but is not limited to, the front feet.  In severe cases, there may be complete detachment of the hoof from the coffin bone.  The animal’s weight, unsupported by the laminae, is transferred onto the sole through the end of the bone, causing excruciating pain and sometimes protrusion of the bone outside the hoof.  Founder describes the symptoms of a horse with severe laminitis.

If founder affects the front feet exclusively or to a greater extent than the rear, the horse may assume a “founder stance”.  The rear limbs will be drawn as far under the body as possible to relieve weight from the forward limbs, and the front feet will be thrust forward with the weight on the heels, as if squatting or sitting on the haunches.  Turning while walking will require raising the front limbs and spinning around on the rear.  When all four feet are affected by laminitis, the horse will be reluctant to rise at all.  The limbs will be tucked under the body to protect the toes from bearing any pressure, and standing will be slow and cumbersome as the horse avoids bearing weight on the points of the coffin bone.

Episodic laminitis will leave rings of abnormal layer formations on the outside of the hoof, but this is not always profound.  Separation of the white line at the toe and in the forward quarters of the hoof is evidence of increased pressure on the sole by the coffin bone.  Secondary infection (seedy toe) is common when this occurs.

Many factors contribute to founder.  An overweight body condition plays a big role.  Stress from foaling, repeated exuberant exercise, chronic systemic infection or disease, and standing or walking on hard grounds may all result in laminitis.

Any sign of lameness (with or without overt evidence of laminitis) should be evaluated by a veterinarian as soon as possible.  X-rays of the feet will be taken after a complete physical examination and assessment of symptoms.  Medications for inflammation and pain may be prescribed, and corrective farriery will be necessary.  Modifications to exercise and diet will be instituted to facilitate healing and prevent flare-ups.  Management will be a long term effort.  In refractory / severe cases, euthanasia may be the most humane option.

Treating and preventing founder requires attention to diet, disease prevention, and avoidance of repeated injury to the feet.  The horse should stay current on vaccinations, deworming schedules, and wellness examinations by the veterinarian.  Despite so many possible causes, laminitis occurs most frequently as a result of improper husbandry and horse management.